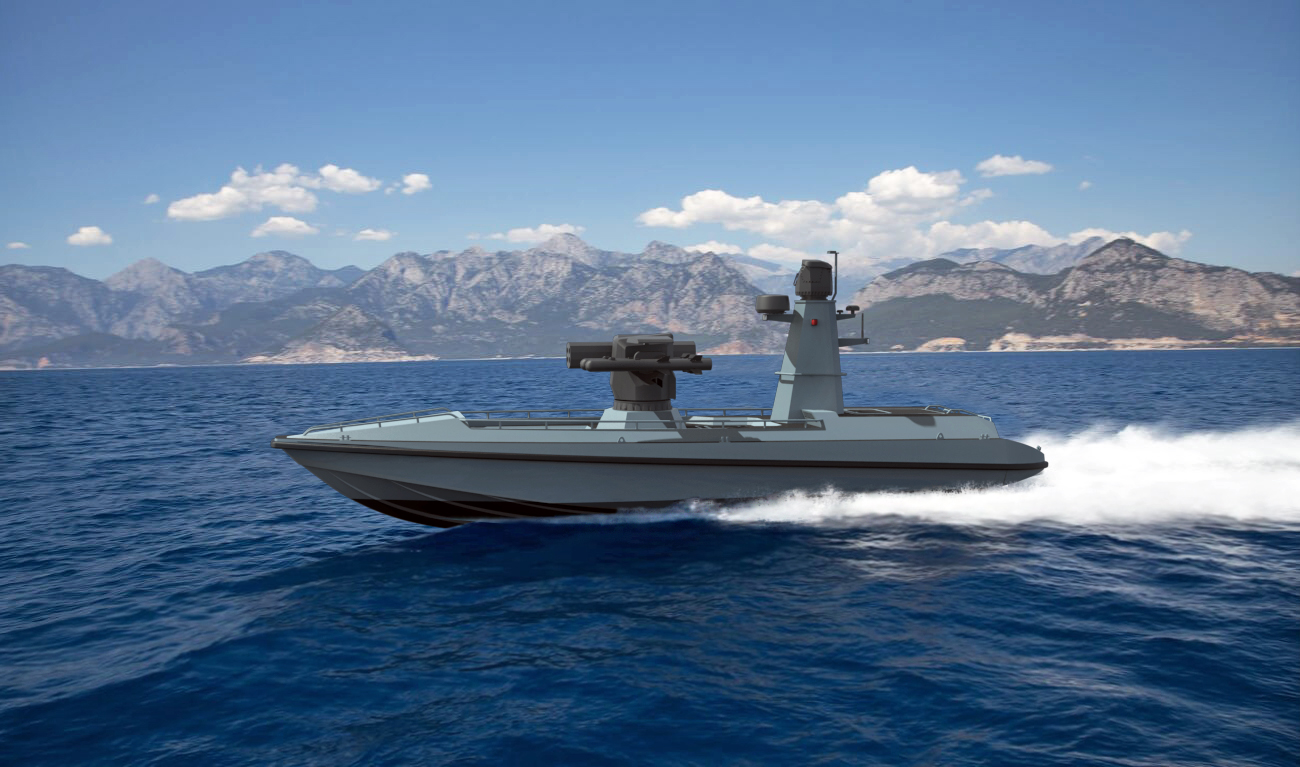 Operating with domestic capital in defense industry, Antalya-based ARES Shipyard and Ankara-based METEKSAN Defence, have launched Turkey’s first Armed Unmanned Surface Vehicle (AUSV) program as a result of intensive R&D activities which have been going on for the last couple of years. Armed Unmanned Surface Vehicle, whose prototype will be launched in December, is going to be the first platform of the “ULAQ” line.

ULAQ; has been built from advanced composites, has 400 km range, 65 km/h speed, day/night vision capabilities, encrypted communication infrastructure, which can be operated from mobile vehicles and headquarters or from sea platforms such as aircraft carriers or frigates, will be used for missions like intelligence, surveillance, reconnaissance, surface warfare, asymmetric warfare, escort missions, strategic infrastructure protection.

The prototype vessel; whose design was completed in August and the structural build has just been completed, is planned to be launched into Mediterranean waters in December after completion of outfitting. First AUSV’s missile systems are inclusive of 4 cells of Cirit and 2 of L-UMTAS, supplied by our national missile systems provider ROKETSAN, where the firing tests are planned in the first quarter of 2021.

Along with the missile systems, AUSV will be equipped with different variations of communication and intelligence systems like jamming and electronic warfare systems to correspond diverse operational needs. AUSV will be able to carry out joint operations with complementary forces such as UAV’s, AUAV’s and TUAV’s. Furthermore, AUSV is not only a remotely controlled vehicle but also and more importantly an autonomous vehicle that hosts artificial intelligence.

It is stated by ARES Shipyard and Meteksan Defence that; after the first prototype vessel, other USVs for the operations like surveillance and intelligence, mine counter measures, anti-submarine warfare, firefighting, search and rescue missions, will be ready to manufacture accordingly.

In the joint press conference dated 28 October 2020, ARES Shipyard CEO Utku ALANC expressed; “We are indescribably happy and proud to announce the launch of the first Armed Unmanned Surface Vehicle program after years of intensive engineering works and investments following our dream. We have achieved this success and pride with our owner’s equity investments by prioritizing our national interests as it always has been. We hereby present the Armed Unmanned Surface Vehicle (AUSV) as the first platform of the “ULAQ” line to be launched in December. ULAQ is a messenger, an envoy from the Ancient Turkish Culture who represents the state with his extraordinary skills since Central Asia. Along with the intelligence and experience, ULAQ possesses extreme warriorship capabilities. Thereupon, the AUSV we have developed, have been named after “ULAQ.”

METEKSAN Defence CEO Selçuk Alparslan stated; “We have once again understood the importance of the ”Blue Homeland” defense, economic exclusive zone protection, protection of maritime borders of the Turkish Peninsula especially with recently emerging disputes. As METEKSAN Defence, we are very proud to utilize our technologic assets of know-how in communication and sensor systems for development of Unmanned Surface Vehicles and present you the very first Armed Unmanned Surface Vehicle of Turkey with ARES Shipyard today. While designing the critical electronic systems of the platform, we have sought the maximum indigenousness and fully considered the operational needs of Turkish Armed Forces. May ULAQ bring the best of luck and success to Turkish Armed Forces and to Blue Homeland.”

At the heart of ARES Shipyard’s success are its willingness to partner with leading design and equipment providers around the world such to produce best-in-class vessel designs, to use the latest technology and highly-trained personnel to ensure superior build quality, and, above all, to fully engage with the client at all stages to ensure that their needs are met or exceeded.

With these principles, ARES Shipyard has become one of the largest composite and aluminum boat builders in Europe, awarded the titles of World’s Best Patrol Boat Builder, Turkey’s fastest-growing company and its largest exporter of military and commercial vessels.

METEKSAN Defence Industry Inc. was established in 2006 in order to combine and coordinate the projects and activities of the high technology companies operating within the body of Bilkent Holding for the defense industry on a single roof. The establishment purpose of the company is to develop and produce independent and unique high-tech products and subsystems for the Turkish Armed Forces and other security forces in line with the vision of The Presidency of Defense Industries.